Before Noah (6-with Down syndrome), I was kind of cocky when it came to home education and my children. I’d gone to all the conventions, heard all the speakers, seen all the programs and curricula and owned most of it (the curricula, that is). I knew exactly what each child needed to accomplish for the year to keep them on grade level with their peers.

Did I mention that was before Noah?

Then again, I’ll never forget the young man with Down syndrome I saw sitting in the middle of an aisle at Hobby Lobby. He looked to be about 18 or so, and he was sitting there playing with and talking to two plastic dinosaurs in a way I would have expected from a 3 year old.

Stop right there. I have NO, absolutely NO issues with a person with a cognitive delay playing in any way that makes them happy. It’s just when I think of Noah’s future, I think he will have more options and opportunities to participate in the community around him if at some level he can be age-appropriate. I think some people with Down syndrome are capable of that, and perhaps some are not. I don’t know where Noah will fall. I can tell you that I have visited with both high-functioning and low-functioning adults with Down syndrome, and regardless of their functioning level, most of them have indeed exhibited reasonably age-appropriate behavior.

Here is where that desperation that comes with being a parent of a child with special needs comes in. I don’t know what Noah’s future holds, but I want to know that I have done everything “right” in equipping him to do the very most he can do. I don’t want to look back and wish I did more. I suppose that’s not really a special needs parent thing – that’s a desperation most parents feel whether their child has special needs or not. I just don’t freak out about it as much with my other kids as I do with Noah.

So, although one part of me says to just let Noah go through curricula and skills at his own pace and not worry about age-appropriateness, the other part of me is concerned about social skills and says he simply cannot stay in kindergarten curricula throughout his entire grade school years, whether that’s where he is cognitively or not. (And I don’t know where he will be cognitively.)

So I did something very counterintuitive to most homeschoolers. I emailed a public school educator/administrator and said “HELP!!!!” I wound up talking to a man high up in the Texas public schools who has had much experience, personal and professional, with special needs education. I threw my concerns at his feet, and this is what (among other things) he told me that has given me so much direction:

The best way to socially integrate and educate our children with special needs like the ones presented by Down syndrome is keep them on age level content wise, but skill level ability wise.

That means I won’t be keeping Noah in certain subject matter for an indefinite period of time until he masters the depth of the content that his peers will, but he will be exposed to the same subject matter tailored to his understanding.

And, just for the record, I am still planning on giving Noah a second year of kindergarten in order to lay the foundation for the rest of his education. Seeing how Bella (5) starts kindergarten work this year, he’ll have good company.

A comment on enlisting the help of public educators – even if we take on the huge task of homeschooling, we really don’t have to re-invent the wheel. The public schools have so much experience and research behind what they do, and most public educators have huge hearts, especially for children with special needs. If you happen across one who is antagonistic about home education, don’t hesitate to smile and thank them for their input and then go your own way; but in my experience they are much more likely to have some really good experience-based ideas that can help you over whatever hurdle you are encountering, whether they are home-school supporters or not.

Perspective is a funny thing.  Very rarely am I universally wrong; it’s just I’m obsessing on details or not paying attention to the big picture.  So I start feeling helpless and start feeling hopeless.  On the down side of things, it could be that my children are behaving badly – why is it sometimes that just absolutely rocks my world?  My kids, my beautiful, energetic, sensitive, selfish, demanding kids can absolutely throw me into a tizzy just by having one argument or one complaint too many.  And then I start asking the big questions:  What am I doing?  How could things possibly have gotten so bad without me noticing?  Does the fact that I give my everything to my family even matter in the big picture?  Will they still be fighting when they’re 20?  40?

Am I really giving my everything?  Could I be giving more?

I blog – that’s not for my family.  (Well, in a round-about way it is – writing is cheaper than therapy – and I don’t have to hire a babysitter).

And what about all that time I spend on Pinterest?  That’s all about me, not them.

So, like, is that okay that I don’t really give my everything to my family?

I just give them my most everything.

Am I doing enough?  Am I enough?

Almost every stinkin morning when I wake up I think to myself, “I’m going to spend some quality time with the Middles today – I’ll read to them or craft with them, or heck, maybe we’ll even bake some cookies.”

And then lunch comes, and with all the quantity time I spend with them, there’s just not enough time – or enough me – for quality time.

Then all I want to do is be alone for a while.

I wonder if they know.

How bad would that be?

In my Mary Poppins fantasy, I am a delightful mother all morning long with the kiddos.  After lunch I tuck everyone in for their quiet time and I sneak off for mine.  Exactly one hour later I emerge from my bedroom all smiles and delightful once again, and we enjoy every moment of the next four hours together.

In reality, I spend a lot of that first hour telling Noah to get back in bed and reminding my Middles it’s quiet time.  At the end of the quiet time hour, I’m still engrossed in whatever internet project I’m working on, trying to unstress from the stressful quiet time hour.

Do you ever think to yourself, “It shouldn’t be this hard”?

And I used to scoff at the idea that the average child asks something like 400 questions a day.  Keep in mind, I still have six kiddos at home.  And the 3-year-old just started this morning with the unending questions, you know, the ones where one question leads to another question which leads to another question.  The ones where you think your child is purposefully trying to drive you out of your mind (seriously, he is!)

I don’t scoff any more. 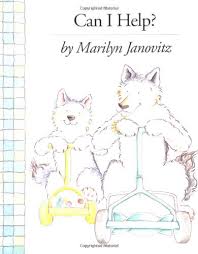 I came across Can I Help by Marilyn Janovitz on our bookshelves the other day, and opening it reminded me of why we haven’t gotten rid of this one.  In this story, the little dog works his way through the day by asking his ever-patient mother if he can help with chore after chore.  This is the kind of fairy tale I am tempted to present to my children as non-fiction – “Yes, there really are children in the world who consider working alongside their mother a treat.”

Actually, to be honest, my kids don’t usually mind working alongside me – it’s when I send them off to go do something that the frustrations begin.

Back to the story.

So Mother Dog patiently answers every request affirmatively and mother and son work together with some amusing results.

Every few pages, several of the last few chores are listed.

I love all the language elements of this book.  It is perfectly suited for the child who needs vocabulary practice in an organic and natural setting.

I’ve made two sets of printable PECs to accompany Can I Help?   One set are nouns and one set are verbs, both are PDF files.  Print them, laminate them and use them as sequencing cards or PEC storyboard cards to nail down child participation and comprehension.  As you read the book, simply pause after the listing of each chore and have your child select the correct card.  Have them lay them down left to right so that a visual sequence emerges.  Older children can use both sets together and separate them into nouns and verbs.  Although you may have to order this book from Amazon rather than find it at your library, it’s definately a keeper and worth the investment of a few dollars.

Thanks to www.mrsriley.com for giving me such an easy format to make these cards in.